13 Reasons Why Japan Is The Architect’s Ultimate Mecca

Originally published by Architizer on September 11, 2013.

What is it with Japan and architects? Frank Lloyd Wright visited in 1905 and, newly obsessed, began collecting and selling ukiyo-e woodblock prints. In the 1930s, Bruno Taut toured Kyoto’s Katsura Imperial and ended up introducing this 17th century masterpiece of pre-modernism to the likes of Le Corbusier and Walter Gropius. More recently, Rem Koolhaas published his paean on the Metabolism movement in 2011 and last year Bjarke Ingels took his entire office for a retreat to this haloed ground.

With sunscreen and a five-page itinerary, I spent a week in August traversing Japan by foot, bus, taxi, subway, ferry, bullet train, and monorail. In a country obsessed with design that has inspired so many, describing everything that wowed me in a single article would simply be impossible. Instead, here’s my baker’s dozen list of why Japan is, and will continue to be, the ultimate mecca for any designer.

Do you roll your eyes when your mom says her favorite painting is Claude Monet’s Water Lilies? Think again. This private underground museum is home to four paintings from this series acquired by art/architecture patron and publishing scion Soichiro Fukutake, who commissioned Tadao Ando to design the perfect room to view these treasures. Shoes off, slippers adorned, you waddle into an antechamber and make your way to a naturally lit room with curved corners and a floor composed of 700,000 tiny ivory marble tiles. The paintings are encased in white marble frames, and, though they hang on a wall, it seems as if they are hovering. Fukutake commissioned James Turrell and Walter de Maria to conceive installations to complement these iconic impressionist paintings. The result is an astounding triptych, but it’s the Monets that truly illuminate this bat cave for an art collection, and Ando makes clear why he is the master of concrete form and large plate glass. 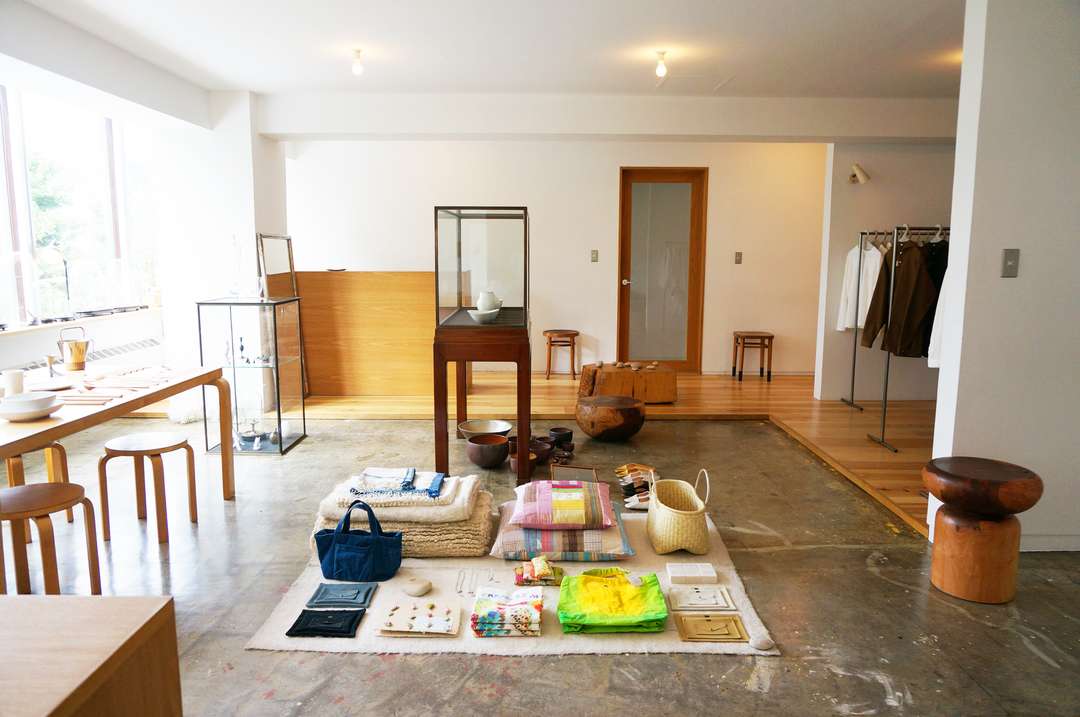 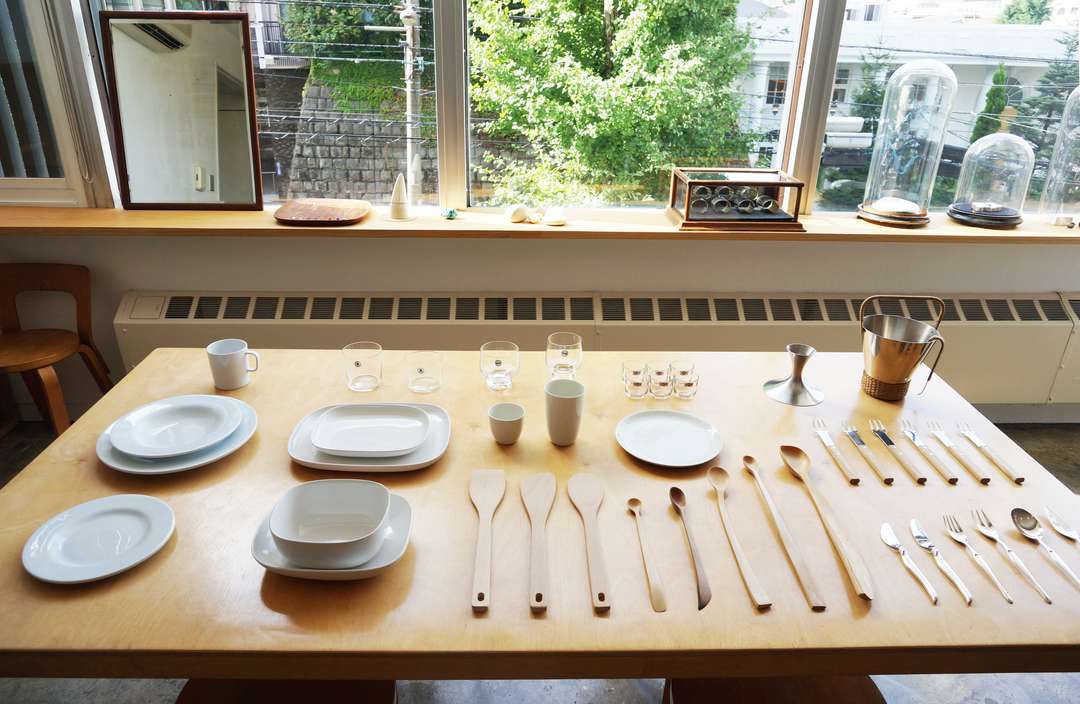 In a quiet residential neighborhood we pound the pavement, desperately trying to find the Yaeca storefront until we realize the shop is on the second floor of a nondescript apartment building. Duh. Frustration turns into elation at this highly curated boutique of the Yaeca clothing label and simple homewares. The marriage of Shaker sensibility with Japanese craft makes this place a subversive destination for retail presentation. 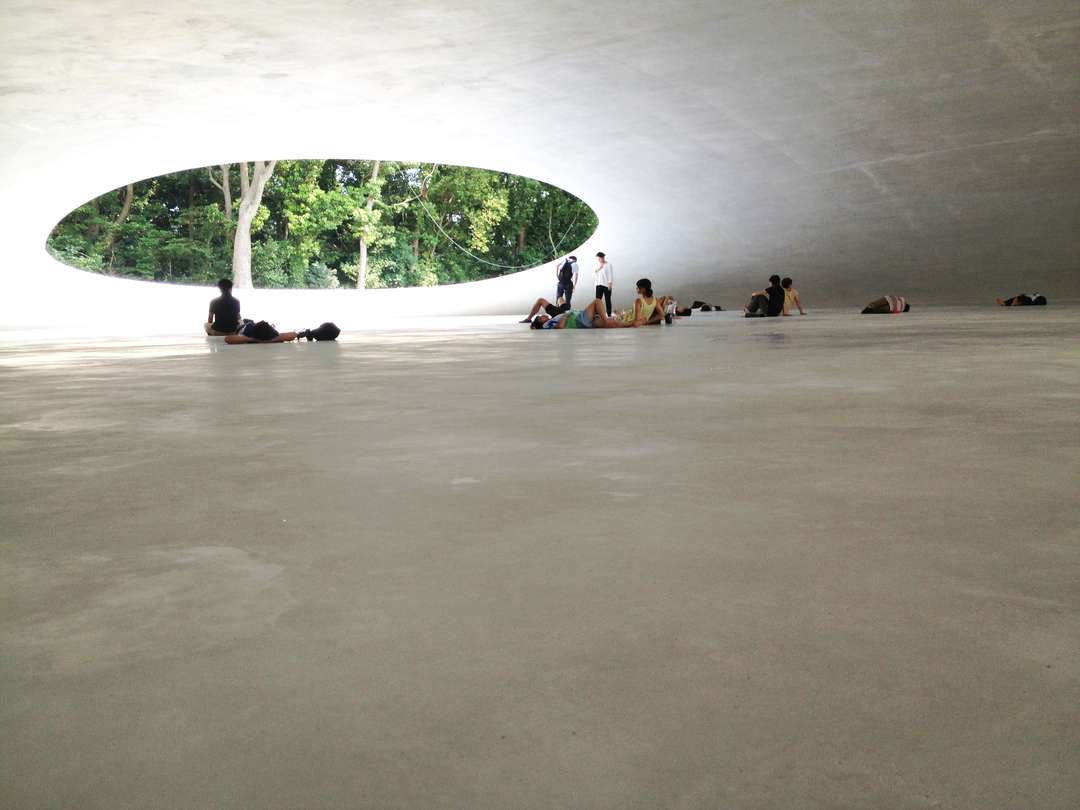 Masquerading as architecture, this inhabitable sculpture is a meditative poem on light, water and concrete. Dozens of Japanese umbrella-touting tourists try to fend off the scorching sun as we wait in line with our timed tickets during this busy holiday season. Again, we take off our shoes and enter through the mouth of this gargantuan dome. People sit, lie, and nap on the floor while others slowly pace the perimeter as if in a trance. Two large openings in the ceiling offer views — one of forest and the other of rice fields and sky. On the ground are artist Rei Naito’s puddles of water that miraculously move in drips and waves toward the voids as the slope and heat create this fanciful extraction. I am in the fourth dimension. 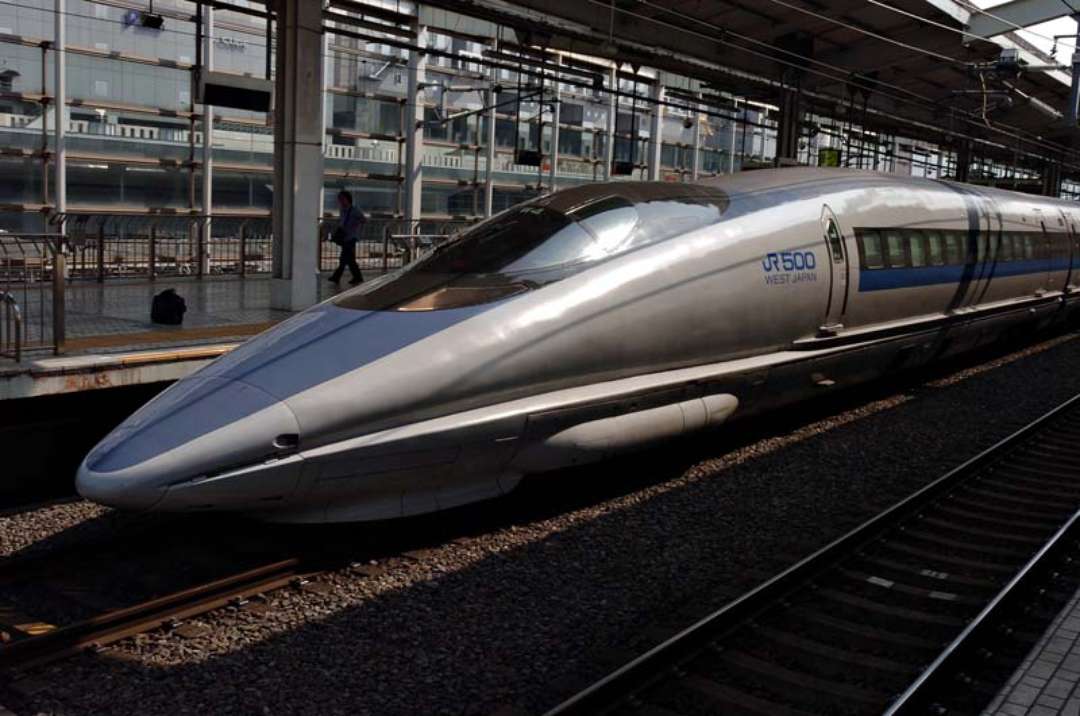 On-time departure, assigned seating, generous legroom, perfect air temperature, and gracious captains characterize the cars of a bullet train that travel 200mph. A six-hour drive from Tokyo to Kyoto is condensed to 140 minutes. Amtrak is a national embarrassment to the United States. 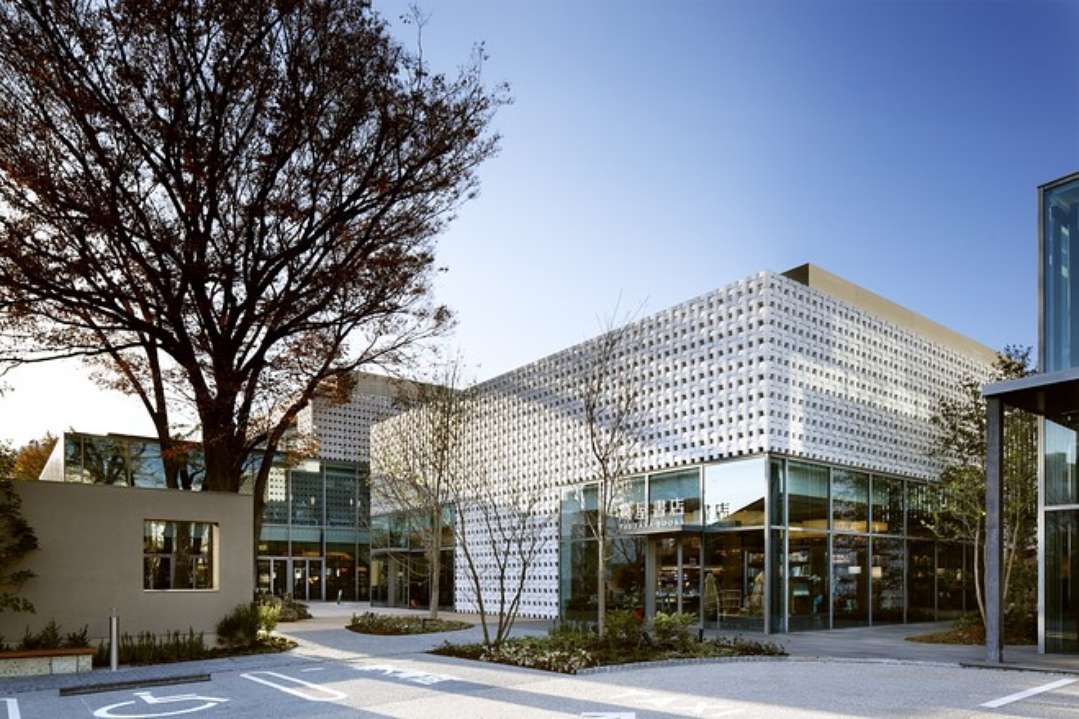 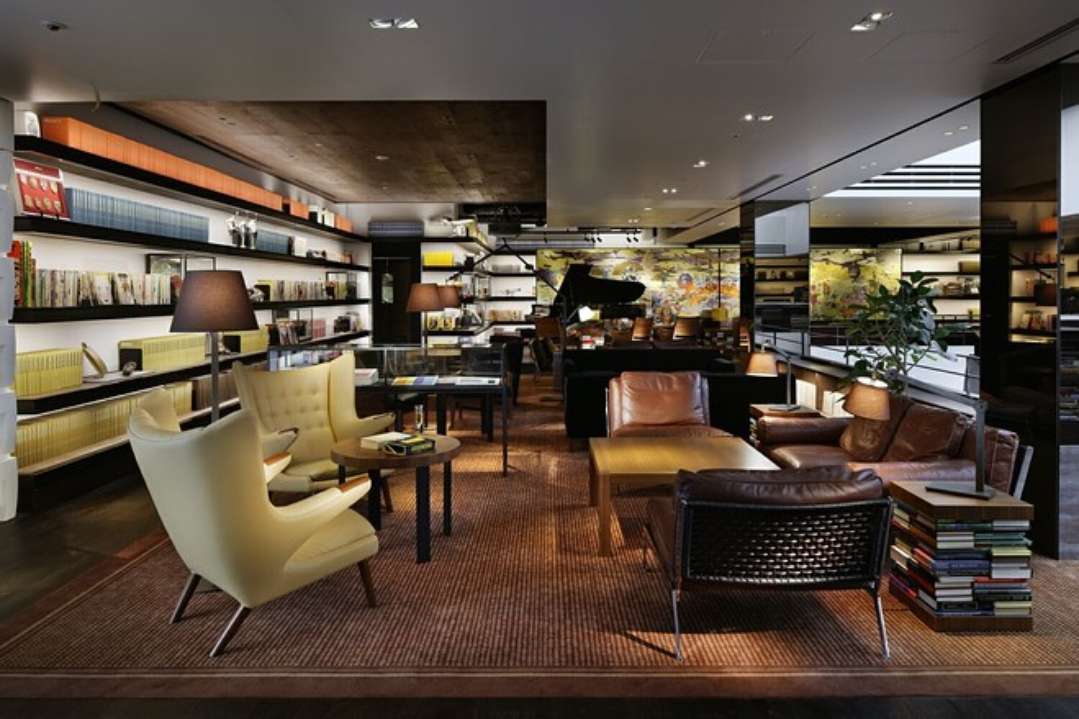 Architectural couple Astrid Klein and Mark Dytham famously invented Pecha Kucha because (as rumor goes) these Western pioneers arrived in Tokyo in the early 90s, didn’t have much work, and spent a lot of time with friends in a bar they designed. Their drunken conversations became the springboard for 20 slides, 20 seconds. Fast-forward to 2013 and their tenacity has paid off. A number of recent high-profile projects have put them on the map beyond the PK movement—including this mega bookstore, officially called Daikanyama T-site. Whether it’s counterintuitive or ahead-of-the-curve, this company of 1500 bookstores is banking on the many centuries of the power of print and devised a retail outlet they call the “third space” between the home and workplace. Sprawling over two buildings and a courtyard, it encourages lingering, surfing, and booking travel (a concierge service for each section is beyond helpful). Developers should take note, this “privately-owned public space” makes New York City’s POPS wanting.

Since late 2010, a renovated village house celebrates the kitchen as the heart and hearth with dining taking place on the edges. A woven canopy of charred-wood shingles extends from the house to the surrounding yard, embracing persimmon and fig trees. The ringed terraced stages are set with low tables and cushions during the day for respite and in the evening cleared for performances. Shima Kitchen’s delicate tempura and Abe’s ingenious and informal series of spaces are reason enough to wait two hours for a table.

Imagine you are in the middle of Tokyo’s “Times Square” and you spy above a parking garage a skate park with undulating poured concrete curves accented by cherry blossom trees. There’s a small field for soccer and another area for rock climbing. Children play, old men tai chi, and birds sing. No joke, this is a public-private partnership between Shibuya’s city council and Nike Japan. Not without controversy, the anti-Nike protesters focused on supporting the homeless who lived in the park and were to be displaced. The company further aggravated the activists when they wanted to rebrand to Miyashita Nike Park. The city engaged the homeless and together decided they would relocate to the ground level, while Nike abandoned the name change and still footed the bill. Very rad indeed. 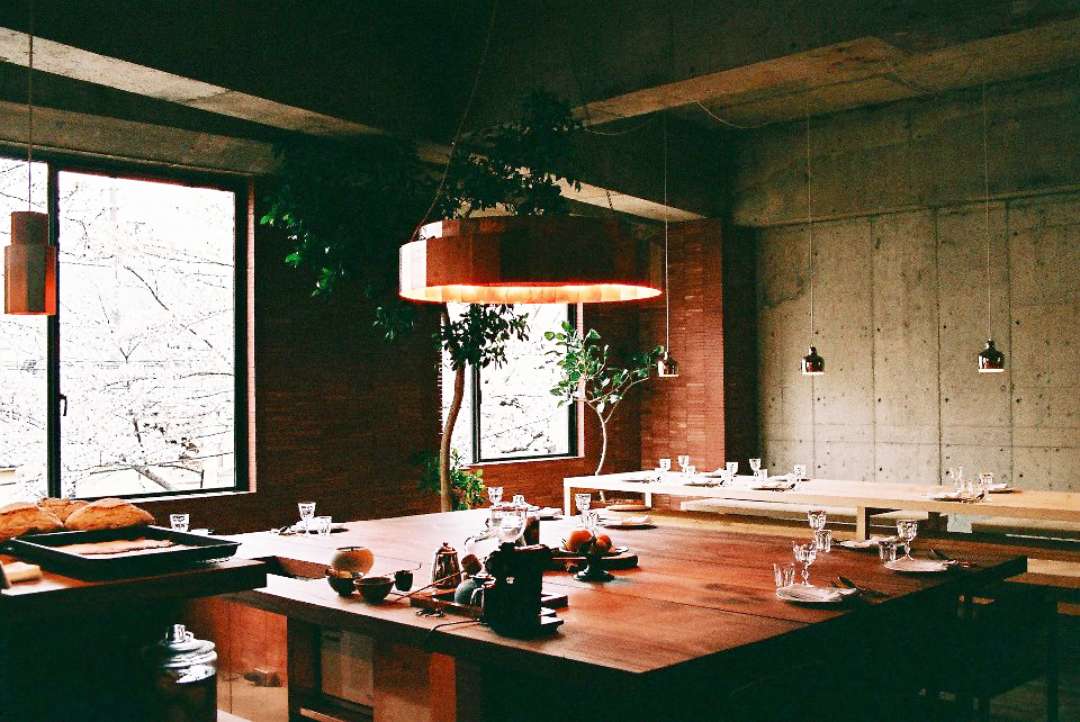 The restaurant industry is not unlike the architectural field—a woman’s rise to the top is still regarded as an anomaly. Chef Masayo Funakoshi trained at farm-to-table Blue Hill in NYC and recently returned to her homeland to direct her own enterprise. She hired designer and ceramicist Teruhiro Yanagihara to reimagine a second floor space in a low-rise building in the heart of downtown Kyoto. With the grace of a tea ceremony ritual, she and Yanagihara have conjured a space that is informal and yet highly ritualized. It’s a landscape of varying sized tables, concrete walls, and stacked bricks. The menu is pointedly Western, yet the food has an Asian sensibility. It’s a kickass East-meets-West experiment of food as art and architecture. 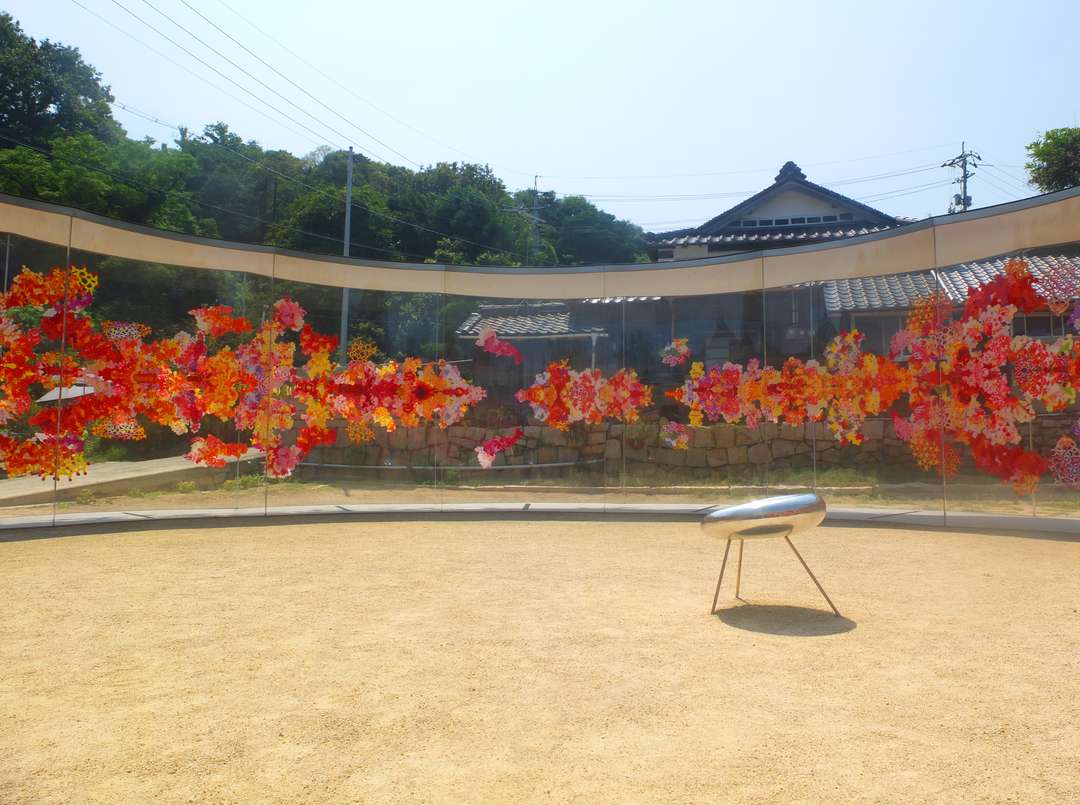 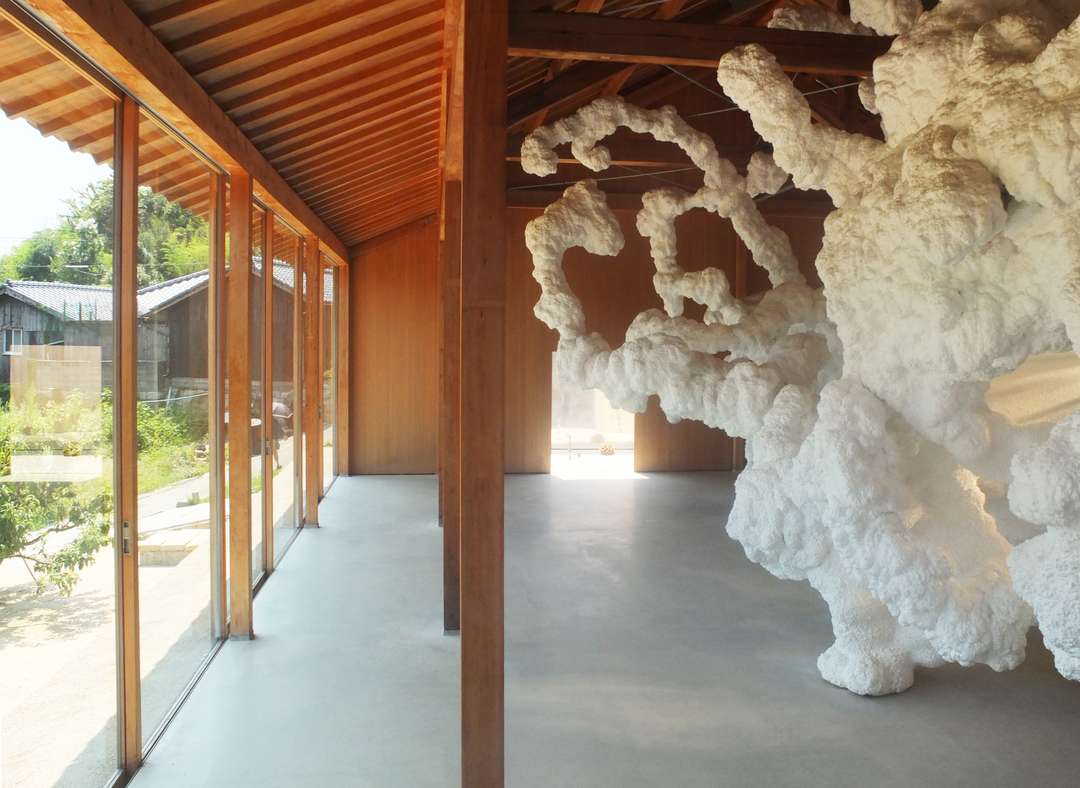 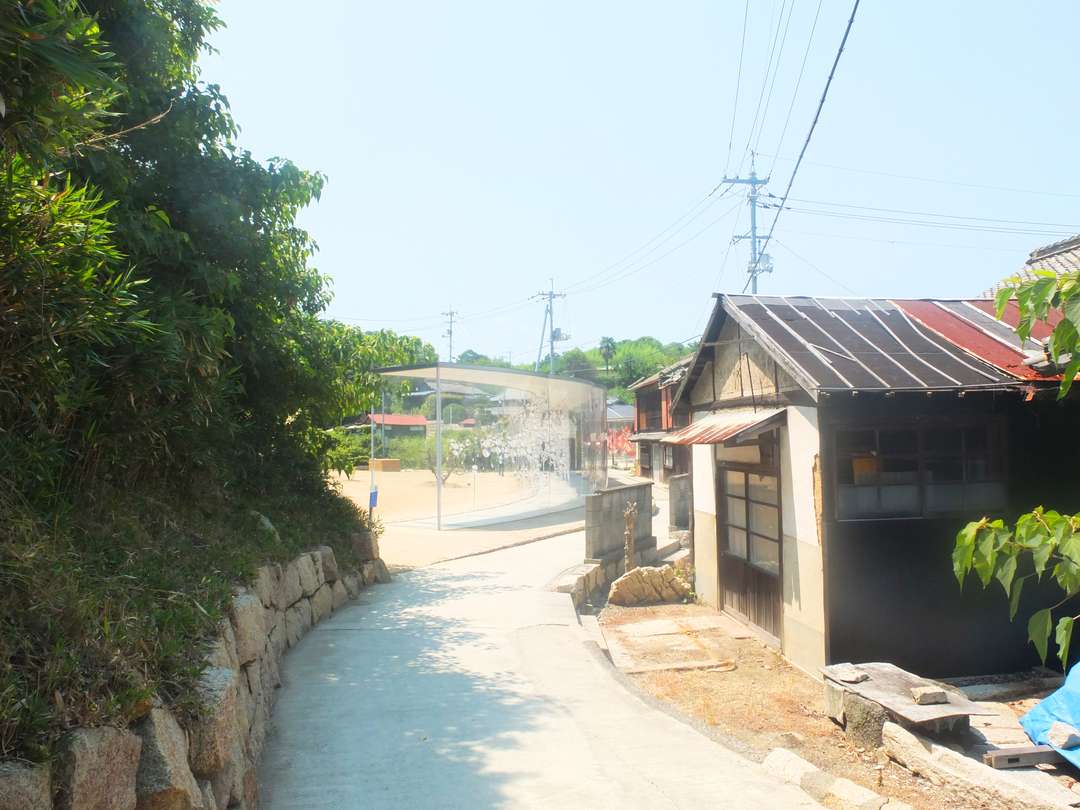 I came to this island for the art installations, but the real inspiration is the village itself. No cars mar this community made up of small modest homes and shacks, meandering walkways that cut into the hilly terrain, and the slate tiled roofs and charred blackened wood that distinguish this region. Small moments mean everything. Shoutout to the best curry joint run by surfers, Trees Restaurant. 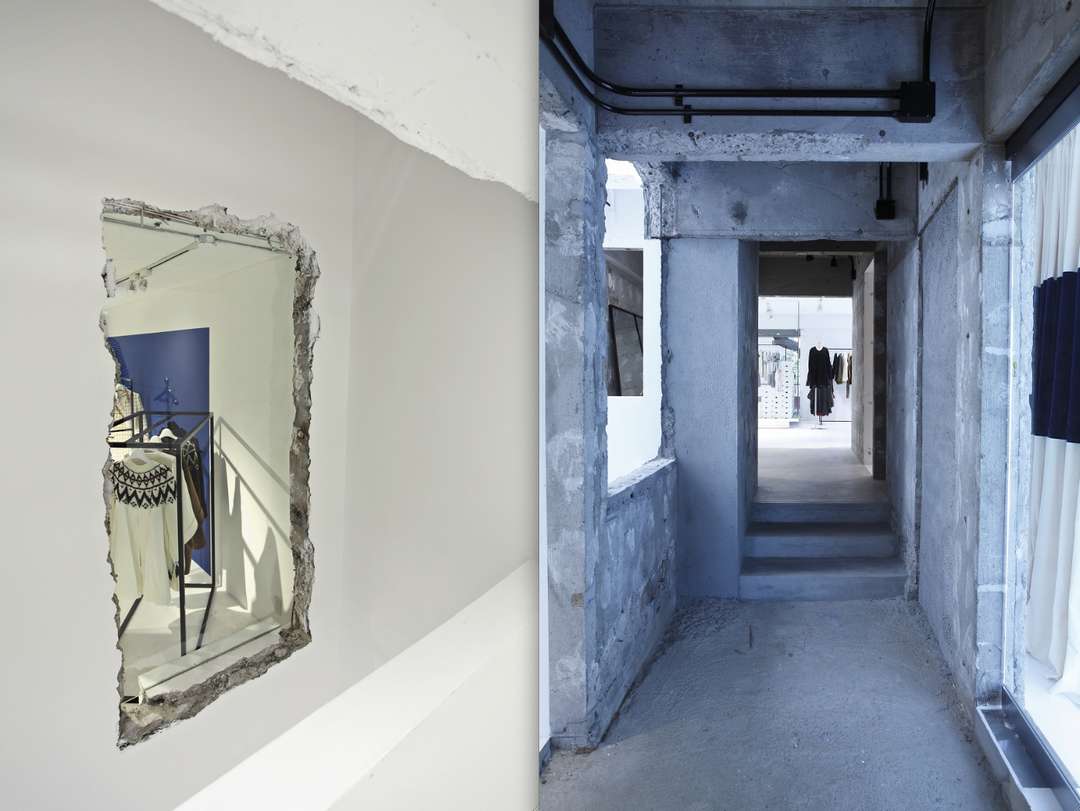 Chitose Abe trained at Commes Des Garcon and started her own label Sacai in 1999. Her quiet steady growth took a flamboyant upgrade when Anna Wintour and Karl Lagerfeld became cheerleaders several seasons ago. In 2011, Abe collaborated with Sou Fujimoto on her first store in the famous and serene Aoyama district. Doing a lot with a little, he carves out a new space from a drab brick building by roughly cutting new openings in the walls and floors making way for light to unexpectedly puncture the interior space, while “finishing” the openings in rough plaster and exposed concrete. Large plate glass walls share vistas to trees, shrubs and grass acting as canvas for Sacai’s gender-bending, über-cool clothing. Can anyone besides young Japanese architects design a breakout boutique? 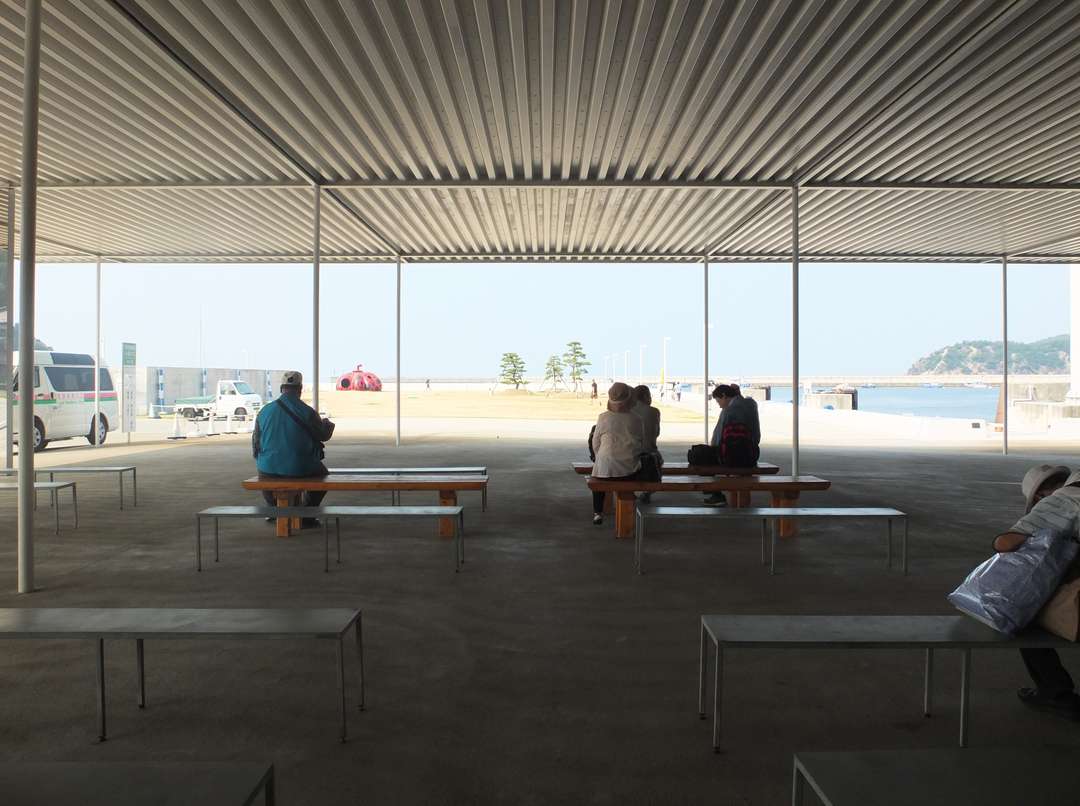 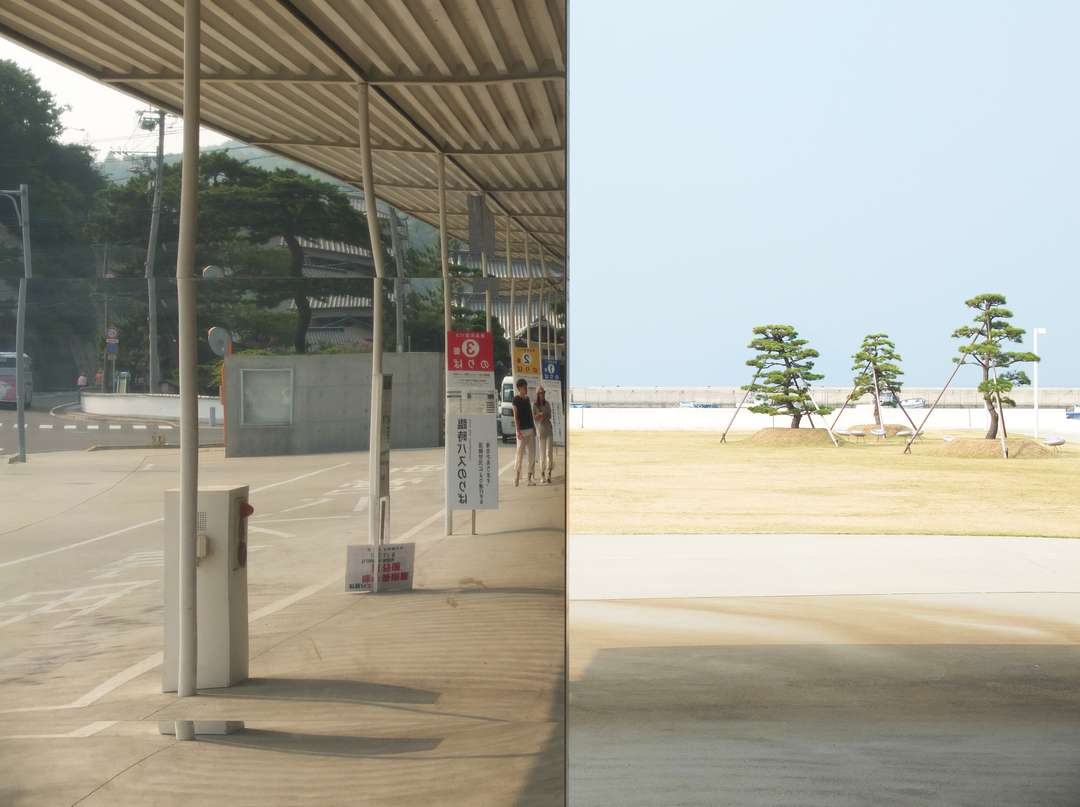 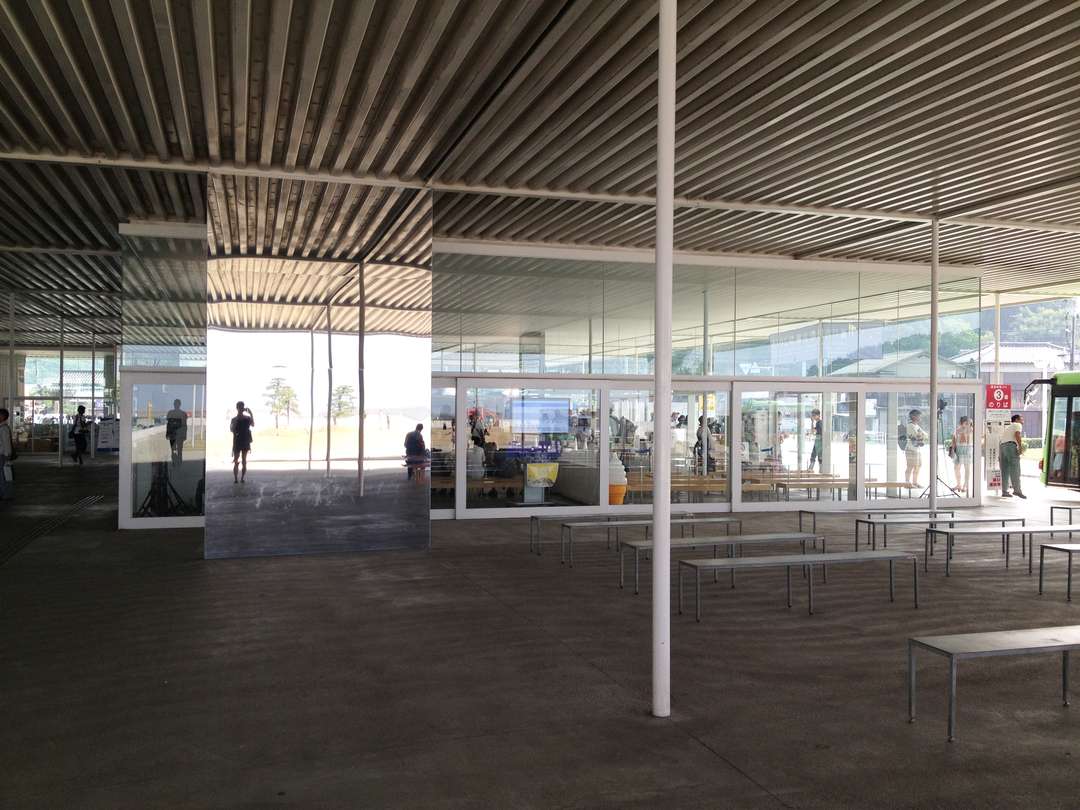 This terminal embodies many opposites: It is banal and beautiful, simple and complex, open and protective. The proportions are perfect. The setting is perfect. The ultra thin columns and mirrored walls strategically placed to carry the load of the expansive roof are perfect. The hype is for real: SANAA is perfect. 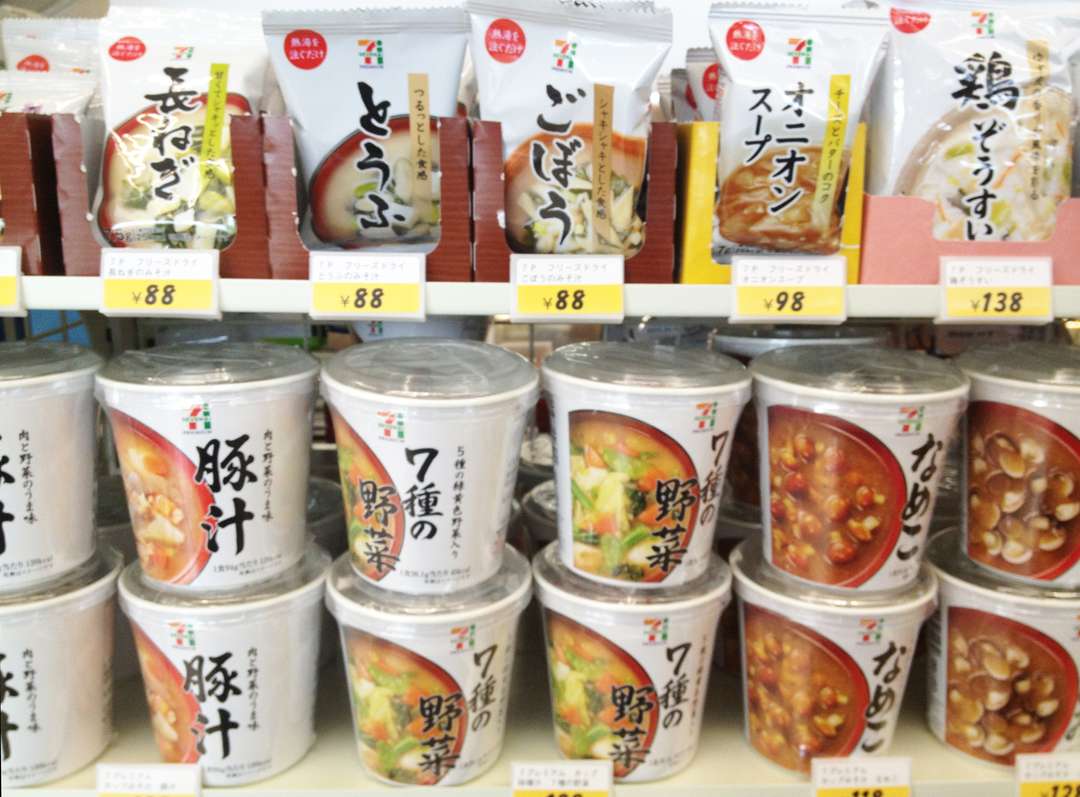 Founded as a single general store in 1927 in Dallas, TX, the 7-Eleven conglomeration fell on hard times in early 90s. A Japanese holding company swooped in and transformed the brand into the largest franchiser of convenience stores in the world. Japan has 15,000 locations, followed by the US with 8,200. There are no Big Gulp-obesity cause and effect issues on this island. Instead the Asian 7-Eleven’s are purveyors of awesome packaging design, healthy snacks, and oni-giri (Japan’s version of breakfast-on-the-go), which consists of crisp nori seaweed in a separate sleeve wrapped around moist rice balls filled with plum pickles or salmon. Their sweet spot is upending preconceptions and embracing mom-and-pop culture by offering amenities like depositing checks and delivering mail. 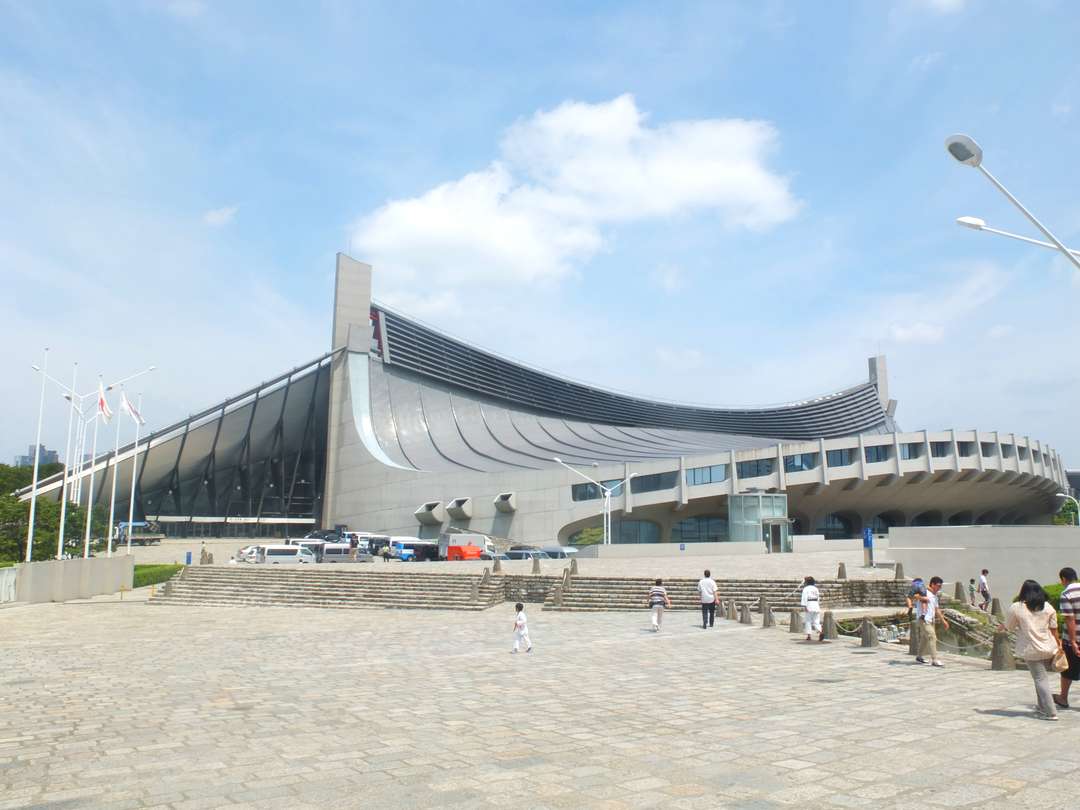 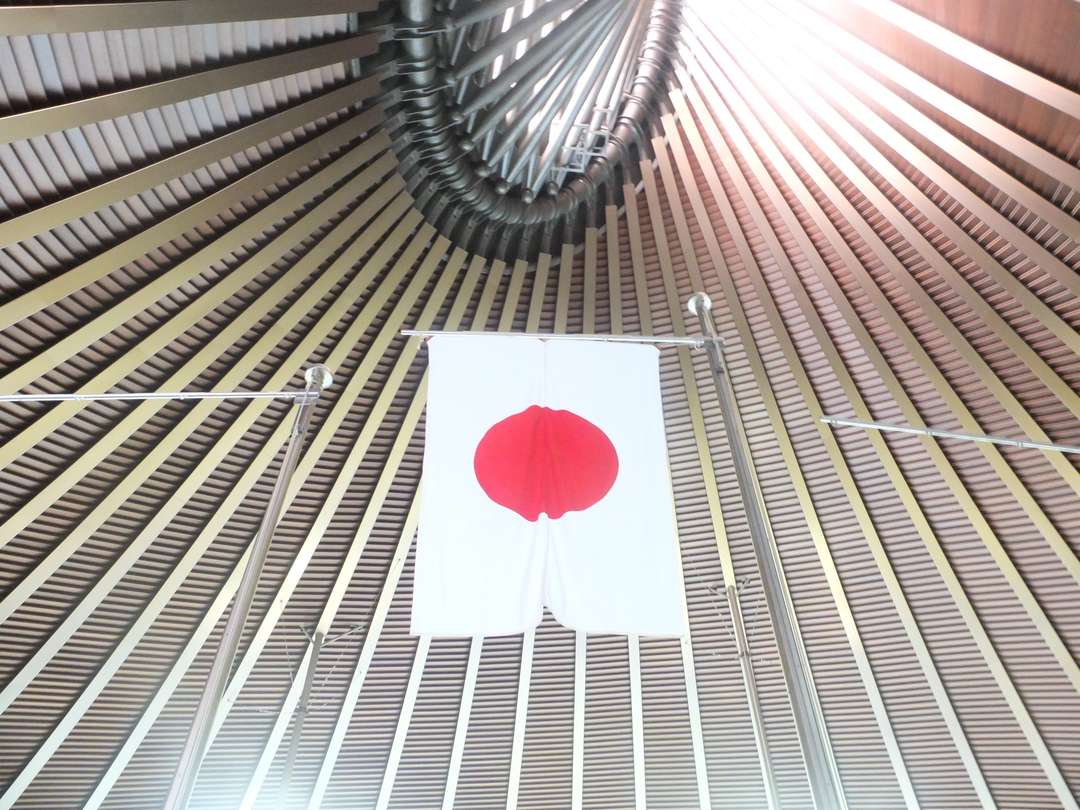 On Yoyogi Park’s main boulevard, I stop dead in my tracks when I come upon this mutant Olympic infrastructure, a cross between a Stegosaurus dinosaur and Ridley Scott’s Alien. Continuing to host various sporting events, the two companion buildings are known for the much-discussed innovation of their suspended roofs. It is my dumb luck that the smaller gymnasium is open to the public and I wander in on a Karate-do festival. The precision and awkwardness of the choreography seems a perfect reflection of Tange’s bold moves bound in a spiral section and two non-concentric circles in plan. In a city that is constantly in flux, this sports center built 50 years ago that transformed national identity and serves the local community is the power of architecture. Tokyo will pay the highest compliment when these gymnasiums reassume their Olympic status by hosting the handball competition in 2020.